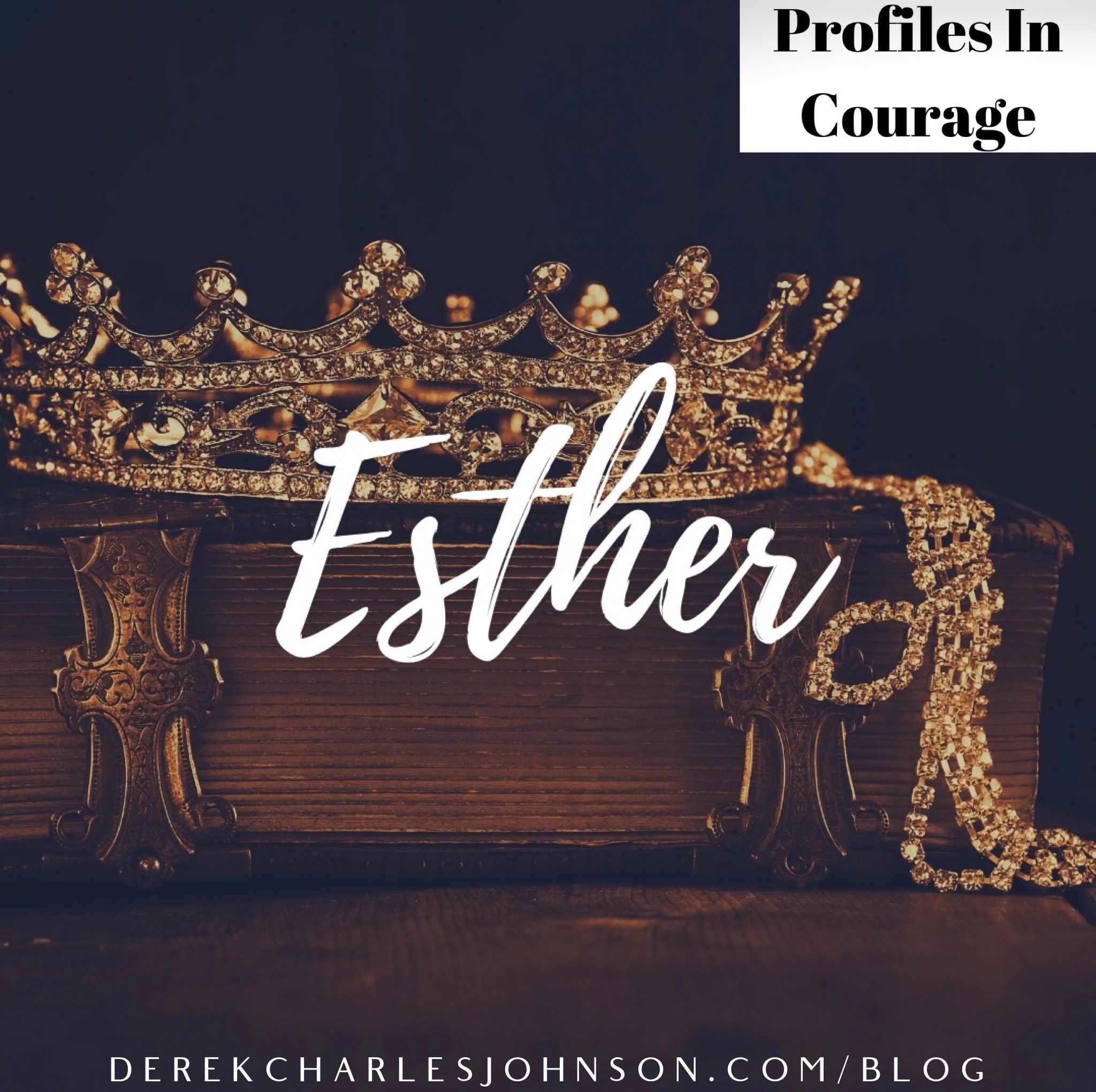 When Esther’s words were reported to Mordecai, he sent back this answer: “Do not think that because you are in the king’s house you alone of all the Jews will escape.  For if you remain silent at this time, relief and deliverance for the Jews will arise from another place, but you and your father’s family will perish. And who knows but that you have come to your royal position for such a time as this?”  Esther 4:12-14

If there’s one book in the Bible that reads like a Hollywood script, for me it has to be the Book of Esther.  Now I know you could make almost any Bible story into a movie.  Several attempts have been made at bringing Esther to life on the screen, many of which are compelling and stir the emotions.  It’s a classic good vs. evil tale.  It’s got the underdog Jewish people pitted against the evil Haman.  It has the refusal of a man named Mordecai to bow down to Haman.  And it has the rags to riches story of a young Jewish girl named Hadassah (spoiler alert, that’s Esther) who gets hand picked to be queen.

Certainly most of Esther is not the type of stuff that would work in some fluffy Hallmark movie.  In actuality, it’s a pretty gruesome book and it’s only by God’s miraculous hand that the people of Israel are saved.  Esther is an orphan girl without parents, raised by her cousin Mordecai.  She is pulled out of obscurity and brought to live in the palace (the Jews were in exile and under Persian rule).  As a virgin, she is groomed to be a possible match for King Xerxes…who has tossed out the previous queen.  This grooming process of course involves sleeping with the king and then being either cast off as a concubine or being the chosen woman for the job.

All the while it is Mordecai who sees a greater picture unfolding as Esther’s selection is no accident.  He sees that an evil spirit seeks to annihilate his own people.  He is able to speak to Esther and influence her to speak to King Xerxes.  The plot involves taking a risk and dealing with the unknown.  But through it all, the hand of the Lord is with His chosen people.  These “Profiles In Courage” blogs have been an opportunity to look at men and women who follow God faithfully despite the environment they live in.  These stories must influence us today as we face similar opposition in our culture.  Let’s dig in and look at this amazing character of Esther; really her story is one that foreshadows the Gospel itself.

1. Esther understands the weight of the times

Then Esther sent this reply to Mordecai: “Go, gather together all the Jews who are in Susa, and fast for me. Do not eat or drink for three days, night or day. I and my attendants will fast as you do. When this is done, I will go to the king, even though it is against the law.” Esther 4:15,16

The backstory of Haman hating the Jews has some underlying bad blood.  Haman the Agagite is a descendent of King Agag, an Amalekite and long-time enemy of Israel.  Haman specifically develops a disdain for Mordecai because he [Mordecai] refuses to bow to Haman, in his advisory role to the king.  This outrages Haman and he appeals to Xerxes to make a decree to destroy the Jews (Esther 3:9).  Any decree issued by the King was irrevocable.  At this point, Mordecai lets Esther know the dire state of things.  He tells her she must act on behalf of her people.  It is in the aforementioned verses that we see Esther understands what is going on:  she asks the people to pray and fast for three days.  The seriousness of the times demands serious action. 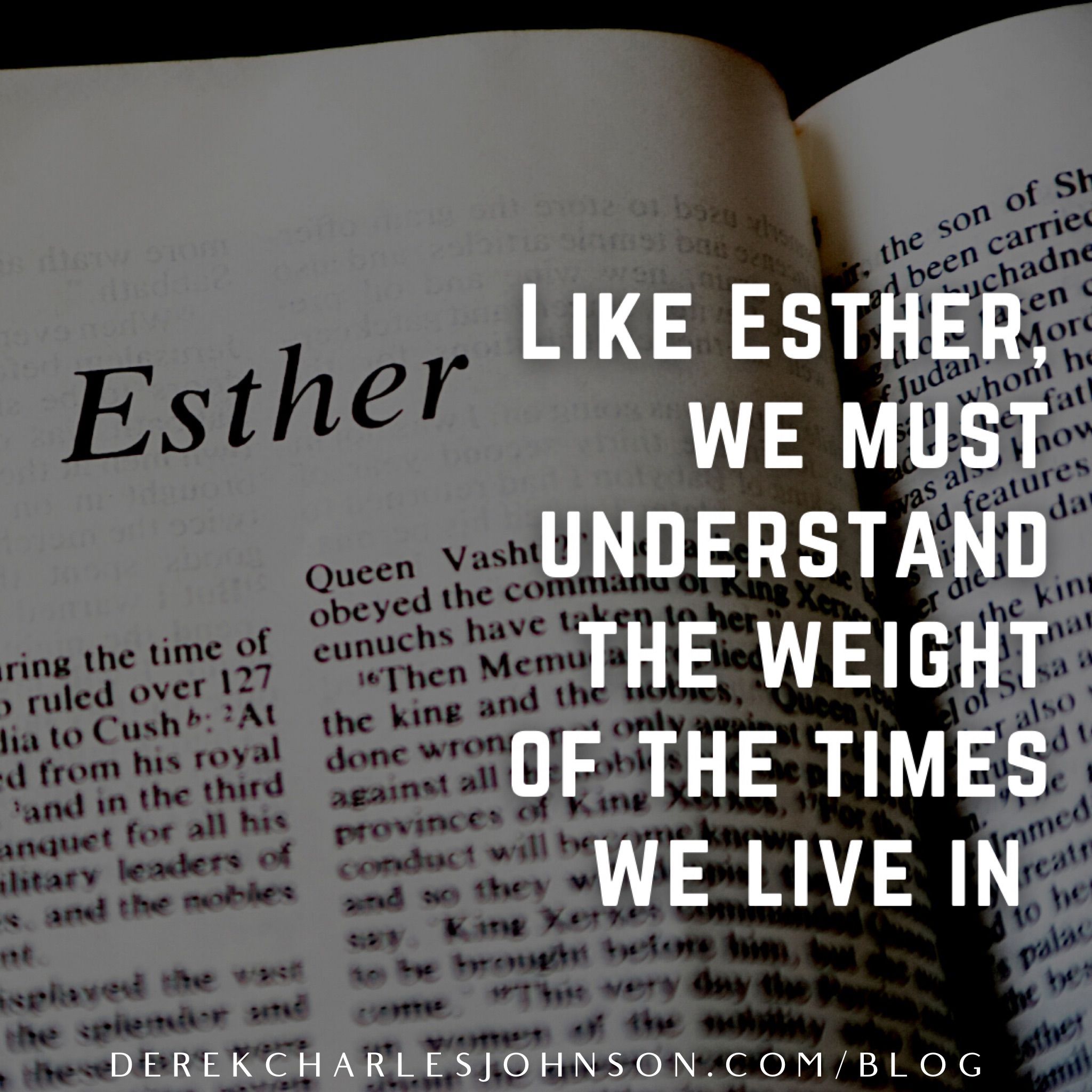 We must know that in our present day, there are times in which we will be called to act in defense of our faith.  It might be a small thing like just letting a coworker know you’re a Christian.  Or maybe praying before your lunch in the school cafeteria.  But it could be as big as losing a position because you don’t want to be dishonest.  Perhaps it is refusing to allow a governmental mandate to limit your expression of worship.  Whatever it is, we like Esther, must understand the climate of the culture we are in.  In that place, we must be willing to seek the Lord to help guide and influence our every step.

2. Esther knows her life must be risked for her people

Esther, like so many who lived during the exile, realized life itself hangs in the balance when choosing to stand for the Lord.  That uncertainty of whether one will live or die is worth the risk because faith calls us to it.  Esther has been chosen as queen, so one might assume she would have favor with the king.  But her status was still quite low in terms of actual power.  She could not go before the king un-summoned; to do so might mean death.  But she goes to the inner court, stands, and King Xerxes sees her.  She wins favor in his sight (Esther 5:1-8).  He allows her to come forth and speak, saying “What is it, Queen Esther?  What is your request?  It shall be given you, even to the half of my kingdom.”  (vs. 3) 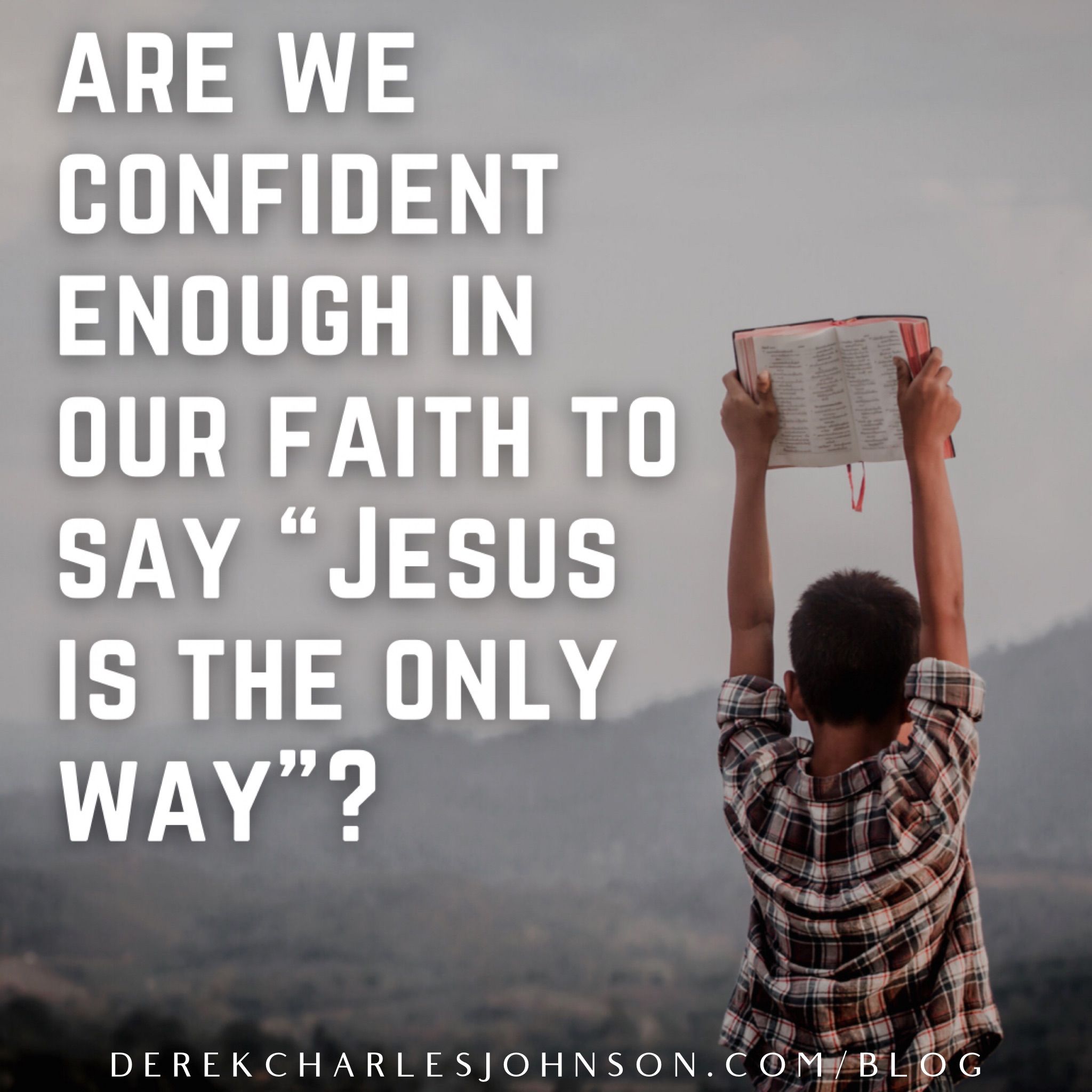 Esther’s boldness is a testimony to us in our 21st century modern times.  We do not often view our faith in terms of whether or not we will die for speaking the name of Jesus.  If we live in the US, we haven’t had to think much about life in those terms…until recently.  Persecution is alive and well and creeping into much of our daily interactions in various parts of this land.  What we must take from Esther’s story is that boldness is not optional.  Even to be willing to die is a question we must come to terms with and have settled in our hearts (just like last week STEPHEN - PROFILES IN COURAGE).  Are we confident enough in our faith to say “Jesus is the only way”?

Then Queen Esther answered, “If I have found favor in your sight, O king, and if it please the king, let my life be granted me for my wish, and my people for my request.  For we have been sold, I and my people, to be destroyed, to be killed, and to be annihilated.”  Esther 7:3,4

Esther, in the difficult position she is in, clearly reveals the plans of Haman against her people.  As Mordecai had stated, if Esther chose not to speak up, certainly deliverance for the Jews would come from some other place.  God always raises up a deliverer.  But I believe Esther knew this was her moment.  The role as a queen was not simply for herself.  It was for all of her people.  She unmasks the truth of her identity before the king:  she is a Jew and her people are on the brink of annihilation.  Of course if we read the rest of the book, we know Haman’s plot is exposed and he is hung on the gallows.  The decree to destroy the Israelites is revoked by a new order for the people to gather and defend their lives from any force seeking to harm them (Esther 8).  Esther’s obedience has offered the Jews the ability to be saved.  Her actions were blessed by the Lord. 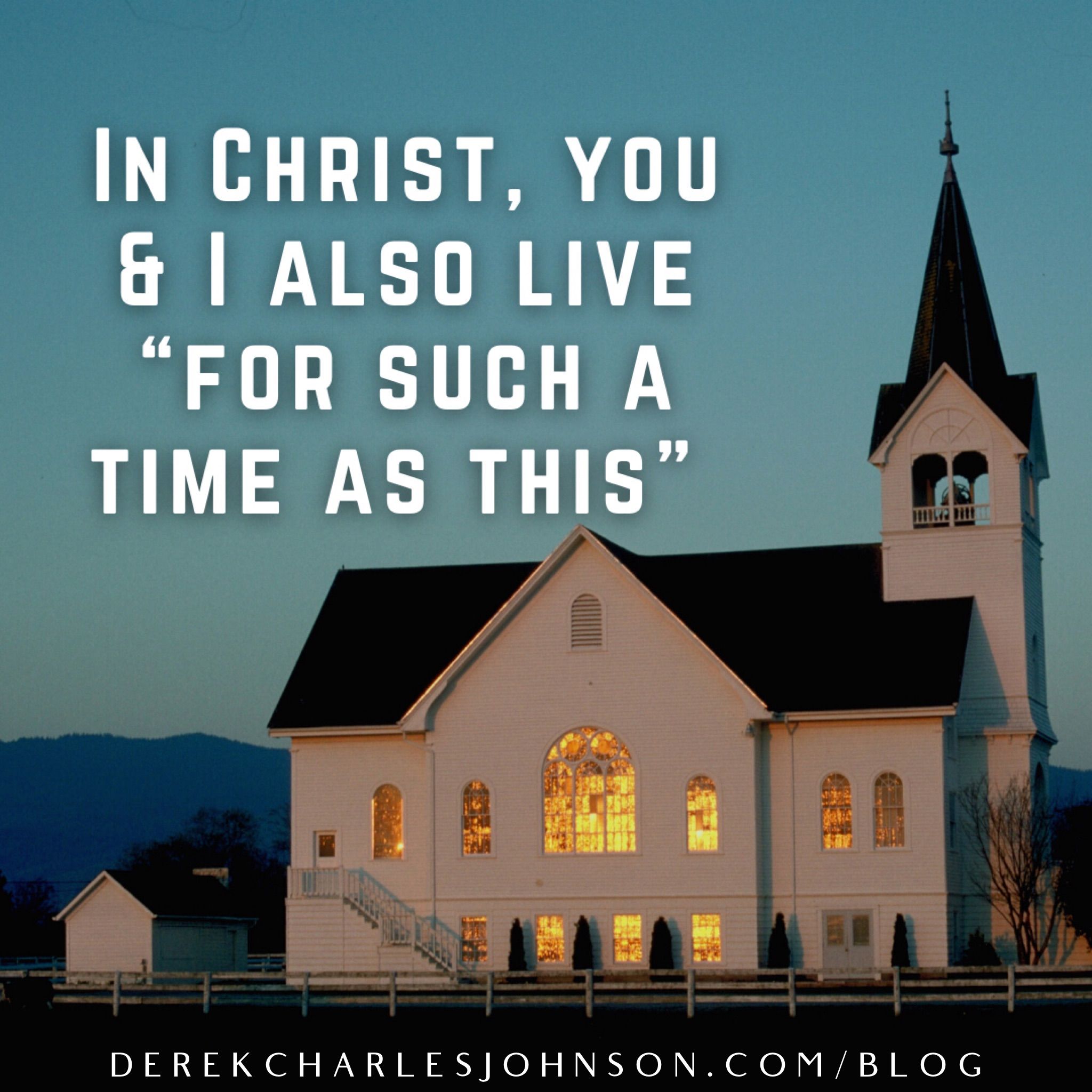 What we can take from Esther’s boldness is our own call to be bold whatever we face today.  We could choose to allow our moment to pass, believing it’s up to someone else.  Esther had that option.  But we also exist “for such a time as this” and we must not miss the greater picture.  Things are happening right now that we have never seen before.  God is raising up men and women to not compromise and not be silent.  We have a wonderful example in profiles like Esther.  We read her story and draw strength as well.  We know the battle is difficult.  But we know the reward is great.  And we know Who our Commanding Officer is!

There’s so much more that could be said about Esther that is difficult to cover in a curtailed blog format like this.  I see in the character of Mordecai a great faith and boldness as well and he was certainly a mobilizing factor in saving his people.  What I would encourage you to do is to go back and reread stories like Esther and stories like Daniel and Shadrach, Meshach, and Abednego.  These are true stories of faith under fire.  They are Biblical examples of what faith looks like under times of persecution.  Again, those are things we haven’t had to think about much in our world.  But I sense the need to bolster my faith for what could lie ahead for the American follower of Christ.

Guys I don’t share any of this to scare you.  We see time and time again in Scripture that God is near to those who call on His name.  He does not leave us or abandon us.  He stands with us in the fire; He’s not far off or distant.  What Esther speaks to me today is that He will take care of His own.  He will not forsake His promise.  Exiled Israel was a time for true believers to be raised up and true God-followers to take a stand.  Are we coming to a point in America where the faith we publicly profess will be challenged and even labeled as hate speech?  I don’t know, but I’m ready for the fight no matter the cost.  Jesus is always worth it!

I love you guys and I love walking this journey with you.  Please reach out if I can be in prayer for some specific need you have today. 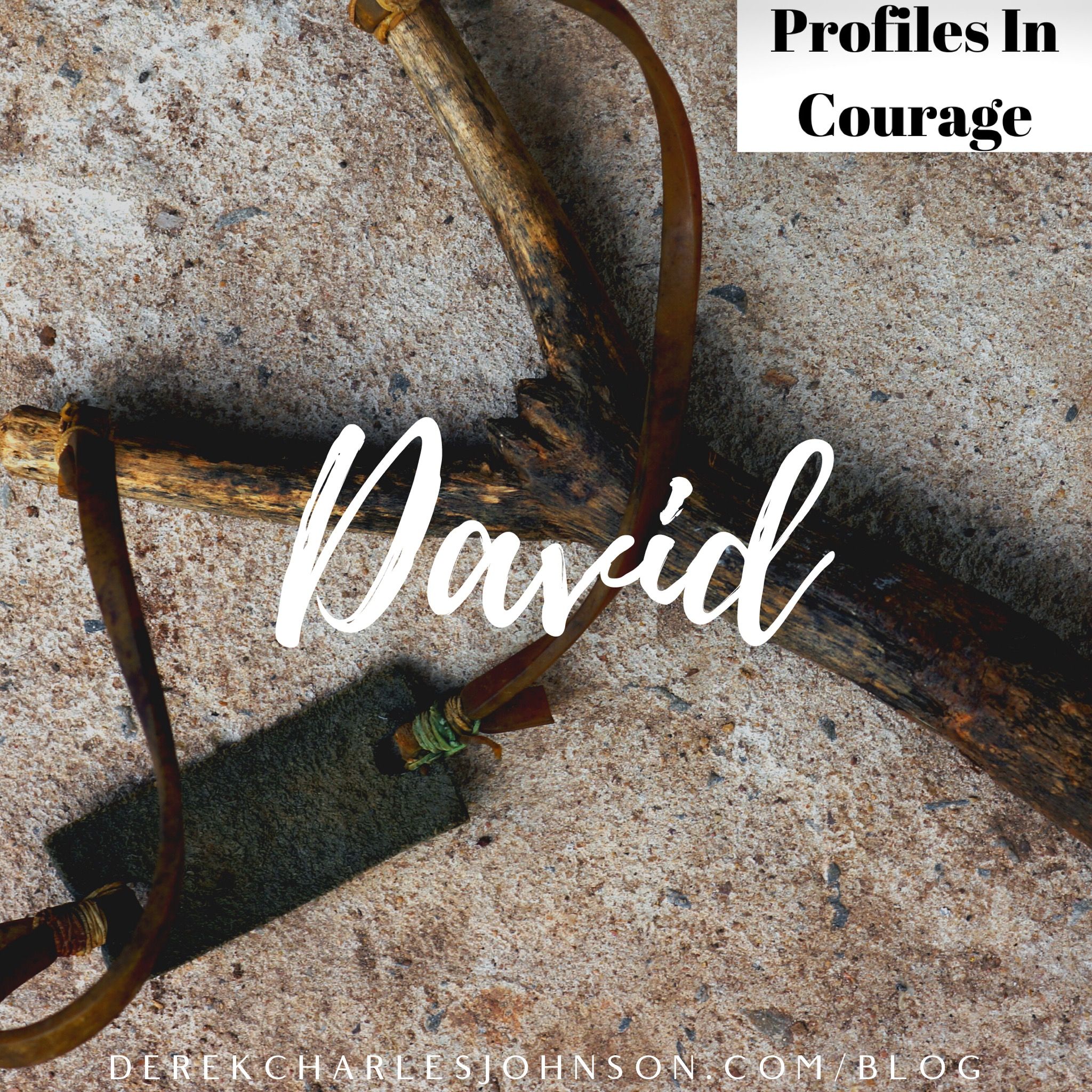 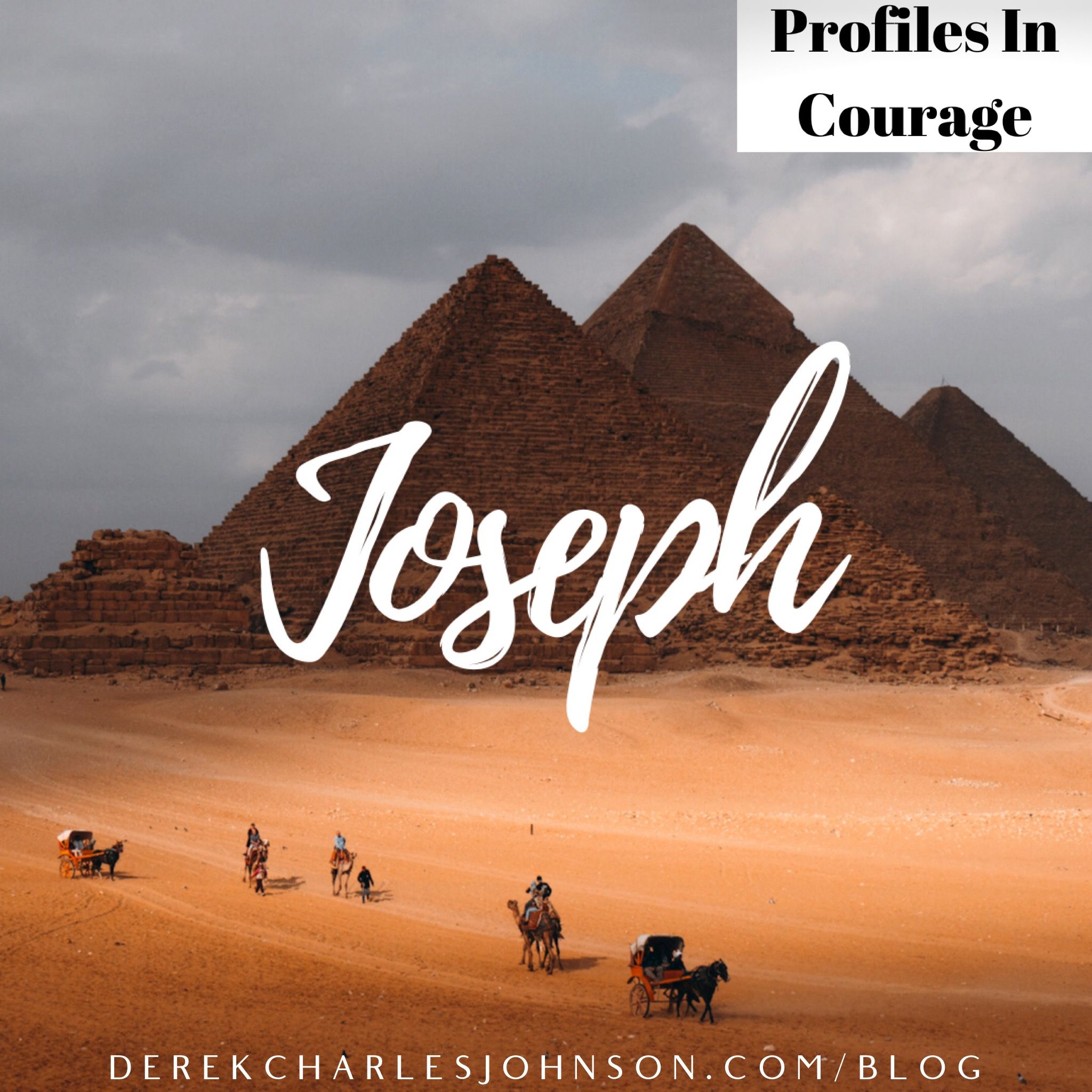 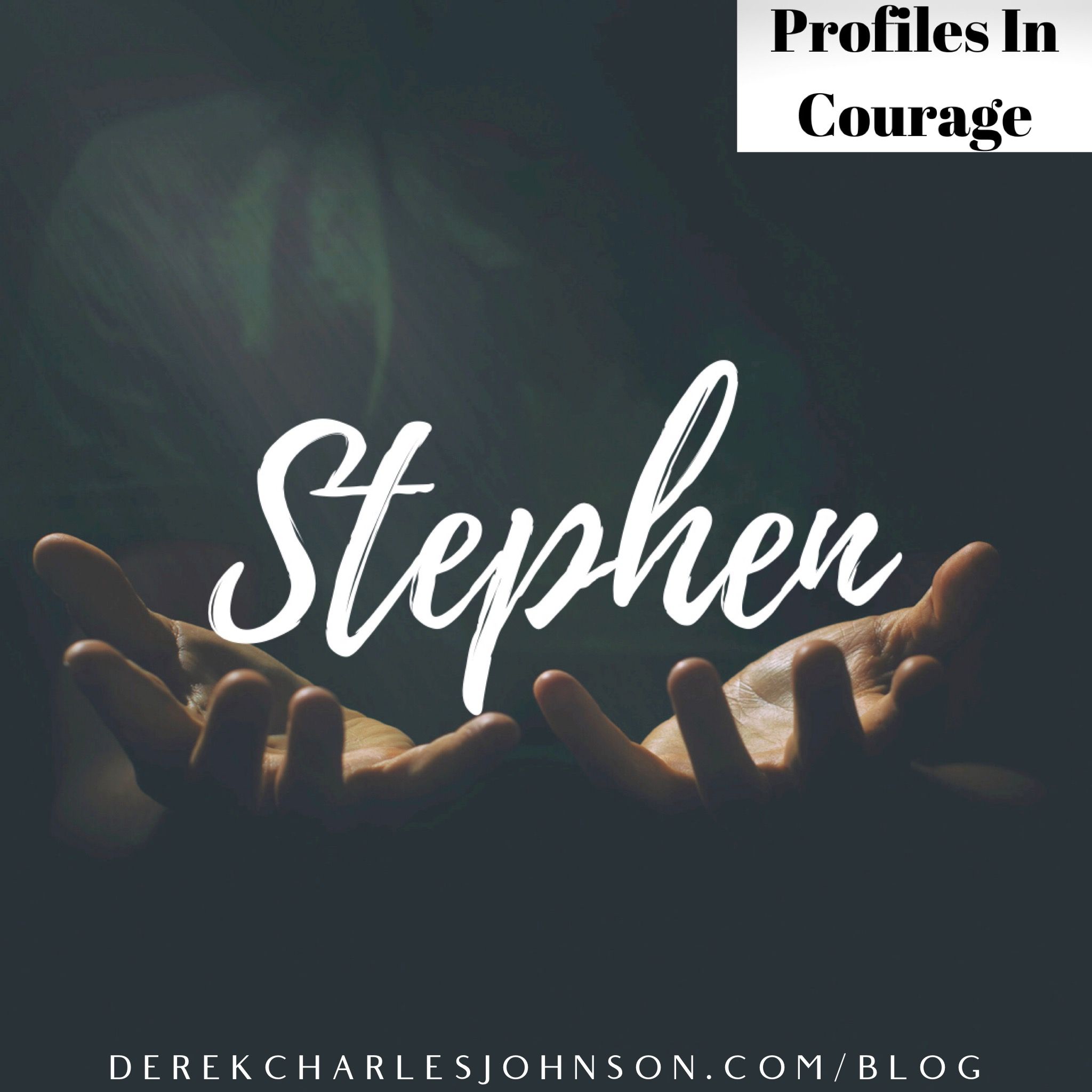